As the title implies, MEXICAN GOTHIC by SILVIA MORENO-GARCIA is an homage to the gothic fiction novels of the 20th century, but one set deep in the mountains of Mexico rather than the English countryside.

Noemí Taboada is the strong-willed, somewhat-spoiled daughter of a wealthy family. She spends her free time reveling in the glamor and decadence of 1950’s Mexico City – dating men her father doesn’t approve of, and enjoying life.

As the book opens, Noemí has been summoned home from a costume party by her father. Expecting to be reprimanded for her choice of date, Noemí is surprised that her father instead wants to talk about her cousin Catalina.

Catalina was recently married following a whirlwind romance. She kept her relationship with Virgil Doyle a secret from everyone, and the two went back to Virgil’s ancestral home as soon as they were wed.

Noemí’s father has received a frantic, confused letter from Catalina claiming that the Doyles are poisoning her and mentioning ghosts. Fearing that either Catalina is in real danger, or that she may need some psychological help that her new husband refuses to provide, Mr. Taboada asks Noemí to visit her cousin and report back about the situation.

Arriving at the crumbling mansion known as High Place, Noemí is immediately at odds with the Doyle family. Virgil is brusque, dismissive, and unhelpful. Virgil’s aunt, Florence, keeps Noemí from visiting Catalina, who she claims has tuberculosis. And the Doyle patriarch, Howard, talks almost exclusively about eugenics.

Now a sickly, bedridden old man, Howard also tells Noemí about his deceased wives. They were a pair of sisters, both wards of Howard when he came to Mexico. He married the elder sister initially, but she died within the year, leaving Howard to marry the younger sister.

From one of the local people in town, Noemí learns about the fate of Howard’s children. Years ago, Howard’s daughter Ruth had fallen in love with a local young man. When the young man went missing following her father’s disapproval of the match, Ruth took a shotgun into the house and shot every member of her family, including herself.

Howard survived his gunshot wound, Florence and young Virgil were not in the house at the time; the three of them were the only remaining members of the Doyle family.

Noemí’s only ally at High Place is Florence’s son, Francis. It is through him that she learns much of the history of the mansion and the Doyle family.  He tells Noemí about his family’s mining business that built their fortune, which has since dried up, and the English cemetery that Howard had constructed – with dirt brought over from Europe – where the deceased Doyles have been laid to rest.

When Noemí is finally allowed to see her cousin, Catalina seems relatively normal. She does seem weak and tired, but more coherent than she was in her letter. Until Catalina tells Noemí that the Doyles can hear her through the walls.

Concerned for her cousin, but unable to convince Virgil to get help for her, Noemí resolves to leave High Place and get help. Up to this point, the Doyles have been creepy and off-putting, but as Noemí attempts to leave the mansion, things begin to get a lot more supernatural.

Moreno-Garcia borrows elements from the classics of gothic fiction, from Flowers in the Attic to Dracula. MEXICAN GOTHIC is a creepy, atmospheric novel. The reader feels a growing dread as the history of the Doyle family is revealed, and as they – along with Noemí – come to understand just how much danger the Taboada cousins are in.

Noemí herself is not a traditional amateur detective. She is focused, driven, and stubborn. But while she has the fashion sense and charisma of a teenage sleuth like Nancy Drew, she has no real interest in solving the case. Her whole focus is on helping her cousin, not piecing together any mysteries.

It is an unusual book, and there is more going on below the surface than I can convey. Once you finish the novel, I recommend seeking out interviews with the author – she has a lot to say about this book, and about the real mining town in central Mexico that inspired the novel. 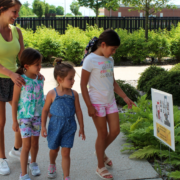 Storywalk at JPL! "Just in Case you Want to Fly"