For these dark, cold winter nights, many readers turn to the cozy mystery genre. It is a genre full of stories of charming small towns beset by serial killers and warm winter cabins playing host to locked room mysteries – with victims and perpetrators alike trapped inside by record snowfall.

While the book I read has many characteristics of a cozy mystery, it is decidedly different than the others. The recently translated AN ELDERLY LADY MUST NOT BE CROSSED is the second book by Swedish author Helene Tursten about quiet, self-possessed, dangerous Maud.

Maud is in her eighties; she has outlived everyone in her family by many years, and has enjoyed a long retirement doing exactly what she pleases. She has traveled all over the globe. She is extraordinarily healthy and mobile. And has enough saved up to continue her current lifestyle until her death. She has a nearly perfect life, except that Maud is a murder.

Maud does not get any pleasure from murder, like a traditional serial killer. She merely sees it as a means to an end.

When the teacher she has been substituting for returns from extended medical leave – forcing Maud out of her teaching job – Maud takes matters into her own hands and arranges an “accident” to remove the obstacle. One snowy night she drops a chunk of ice on the other woman’s head.

In addition to ensuring her own survival as a single woman in Sweden, Maud uses murder to deal with pesky neighbors and those who pose a threat to her friends.

The people who fall victim to her coolly calculated wrath are mainly deserving of punishment. Men who abuse their wives (and disturb their downstairs neighbor on Christmas Eve), women marrying elderly men just for their money (especially when the man happens to be an old flame of Maud’s), and fully grown adults who accrue so much gambling debt that their mothers (and Maud’s favorite neighbor) have to sell their apartments to pay off those debts.

Maud will bring about their deaths, and she will never even be suspected. That is, until she murders someone a little too close to home.

At the beginning of An Elderly Lady Must Not be Crossed, the final murder of the first book is still an open police case.

An antiques dealer came to Maud’s apartment to make an offer on her father’s silver collection, but when it became clear that he was planning to undervalue the pieces, and make off with three of the most expensive items, Maud hit him with the fireplace poker – causing him to fall face first into the fender and impale himself.

Maud did her best to cover up the crime: leaving a small trail of blood with an old shoe, cleaning the poker so that the police would not find prints, and booking a few days at a spa so she could have conceivably been out of town when the murder occurred.

She even fools all of the police investigators using her infirm elderly lady technique – all of them, that is, except two officers, who are back at Maud’s door as this book opens.

Finding herself in a tight spot, Maud decides to go on an extended trip: an expensive safari in her favorite part of Africa. On the plane ride from Sweden to South Africa, she finds herself reminiscing about other justice-driven murders from her past.

An Elderly Lady Must Not be Crossed is a collection of stories, told with the frame narrative of Maud’s trip to South Africa. Things that happen on her trip remind her of times she was driven to crime to solve the problems in her life.

Readers can tell that Maud has no remorse for her victims. In her estimation, each and every one deserved what they got – and made life a little easier for Maud.

In my opinion, it is not necessary to read the first book – An Elderly Lady is Up to No Good – before reading this one. Each book stands on its own well enough for readers to feel confident starting with the second book.

If you are looking for a quick read to distract you from the cold this winter, try Helene Tursten’s AN ELDERLY LADY MUST NOT BE CROSSED. 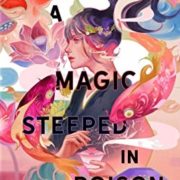 A Magic Steeped in Poison by Judy I. Lin 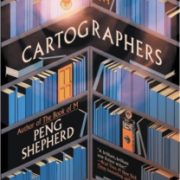