Favorite Children’s Books Reimagined: What Do You See?, an exhibit featuring abstract paintings by Lori Marble, will soon be at the Library!

Remember your favorite books from childhood? Perhaps you even have one or two on your bookshelf today? Now, picture them reimagined as abstract paintings. Artist Lori Marble, the now adult child of a librarian, lovingly remembers the books that shaped her childhood.

She asked the librarians at Joplin Public and Post Art Libraries about their favorite children’s books, read them, and painted them in an abstract, mixed-media style. She paints in an ambidextrous fashion, laying down large swatches of bold color using a palette knife in her left hand, while incorporating bold brush strokes and subtle details with her right. Her love of symbolism and pattern is evident in each work on paper.

The display is purposely hung at a child’s eye-view and will prompt each viewer to ask “What do you see?” This exhibit is presented by the Post Art Library in The Bramlage and Willcoxon Foundation Gallery. Free and open to the public.

An opening reception will be held in the gallery on Thursday, June 9th from 6-7pm. 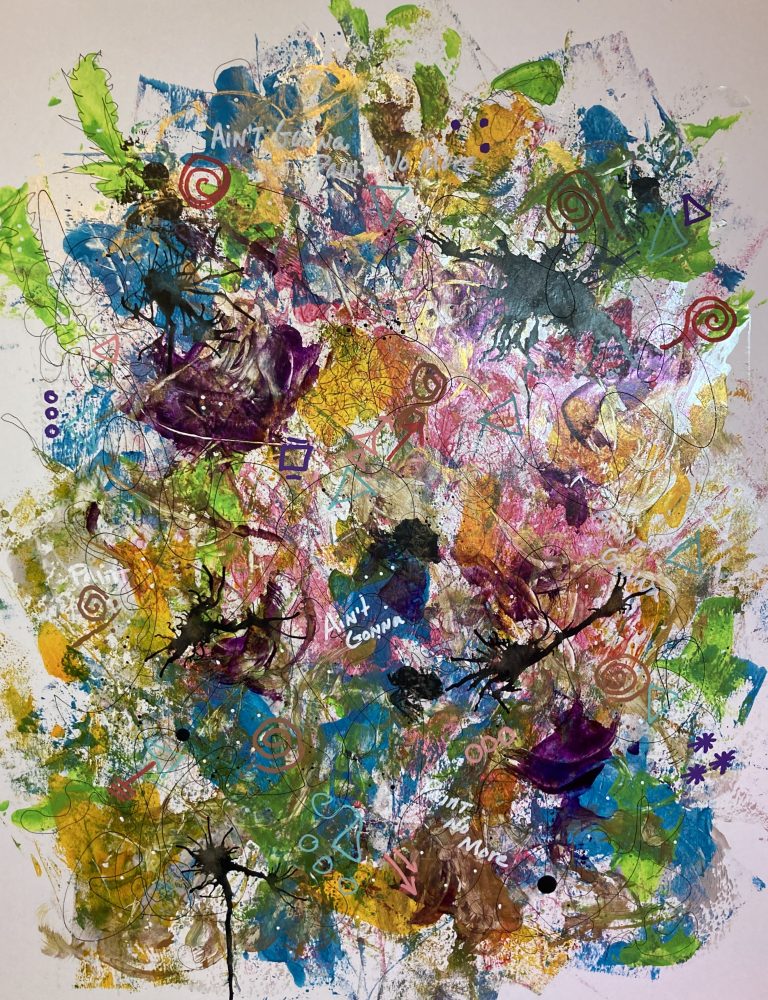 So when I saw “Stay” featured on the Facebook page of an Oklahoma public library that I follow, I knew I had to read it. Problem was, Joplin Public Library didn’t have this already two-year-old children’s book in its collection. No worries, I simply suggested it for purchase and impatiently waited until it arrived.

Written and illustrated by sisters Kate Klise and M. Sarah Klise, respectively, this storybook is subtitled “A girl, a dog, a bucket list.” Lest you think with wording like that that it will be a heartbreaking tale of loss, let me assure you that “Stay” is in fact a sweet story of the special relationship between two friends.

Eli, a big, fluffy, gray and white dog, has been around since Astrid came home from the hospital as a newborn. As Klise puts it, “He was Astrid’s first friend.” He is her protector, her playmate, her pillow. He eats under the table when she eats, and sleeps in her bed.

But as Astrid grows up, Eli grows old. It’s a poignant refrain in the book.

One day Astrid comments on how slowly Eli walks now. After a special day at the park, spent eating popcorn and sliding down a sun-warmed slide, Astrid vows to make a list of the things Eli should do before he gets too old. She forms a bucket list of adventures they can have together.

What’s on Astrid and Eli’s bucket list? Riding a bike. Checking out dog books from the library and reading them together. Going to see “Lassie” in a movie theater. Sleeping under the stars. Taking a bubble bath. Astrid even surprises Eli with something special.

Weeks pass, and Eli continues to age. His vision fades, and he no longer has the strength to walk to the park. But that doesn’t matter, as Astrid and Eli happily spend precious time together.

I will warn you, I shed tears while reading this book. It’s not that “Stay” was sad, per se; it was just bittersweet, and it made me think about the dogs I’ve had in my life, and how I watched them grow old.

There was Charlie, the intelligent and loyal black miniature poodle I grew up with. Then came Costi, the yappy Shih Tzu prone to begging at mealtimes that joined my family when I was in high school. Toby, the first dog I adopted as an adult, was a stubborn, willful Rottweiler-German Shepherd mix who tested my patience but became my whole heart and taught me how to enjoy life again. Molly, a rescue rough-coated Collie was possibly the sweetest dog I’ve ever met. All those dogs are gone now, but I have Buster, my fun-loving Corgi-German Shepherd mix who at 10 years old still likes to jump off the side of the back porch, chase rabbits and tussle with my dog sister, Destiny. But even now Buster is slowing down. His eyes are growing less bright, and white hair is starting to creep into his muzzle. I’m confident he has years left, but I’m still aware of the inevitable passage of time.

I hope you find inspiration in this lovely book, which can be found in the Children’s Department of the Joplin Public Library. Yes, we grow old, as do our animal companions, but there is still much fun to be had together. Embrace the time you have, and make it special. Even the little things you do create lasting memories.